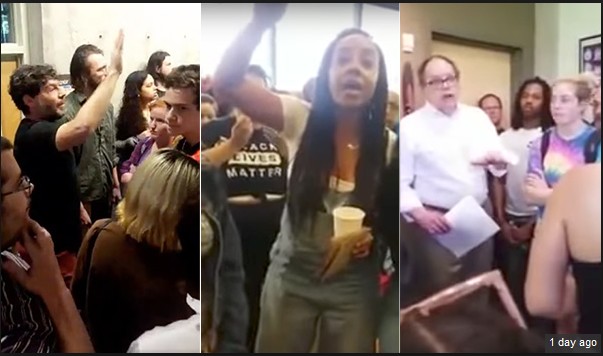 With my two girls in their first year of college this past year, I’ve been highly attuned to all the craziness that’s been going on at Berkeley, Notre Dame, Middlebury, and other colleges, and now Evergreen State College. Whoever heard of Evergreen State before this past week? I think they’re having their fifteen minutes of fame, and I hope they’re enjoying it, because I suspect the enrollment’s going to drop, at least among students who actually want an education and hope to get a job someday. I feel like a broken record on this topic in my house, ranting and raving about the continuous assaults on free speech and critical thinking at these institutions of supposedly higher learning.

The latest such disaster is occurring at Evergreen, a tiny liberal arts college in Washington state. If you haven’t heard about this one, the short version is, a bunch of whiny babies, er, students from this college threw a collective fit because one of their professors exercised his right to free speech in a polite, thoughtfully written letter objecting to a planned activity that banned white people (including professors and staff) from being on campus for a couple of days. He failed to see how such a racist policy was helpful in improving race relations, or, ya know, teaching college students the information they were there to learn. These students literally cornered their professor in a hallway and hurled curse words at him and refused to let him speak in defense of his not-unreasonable point of view. In other words, they weren’t the least bit interested in any “conversation”.

Following that episode, they assailed the president of the university with a further barrage of screaming foul language and a written list of demands, including pizzas, no homework, and a forced apology for all of the president’s personal short-comings, like not using gender-neutral pronouns. If you watch any of the video of this, your first thought, like mine, will probably be “Dog Day Afternoon”, and the second will be, “What the heck are these kids gonna do when they get out in the Real World?”

My words to these coddled, self-important young folks would be this. You’re so concerned about privilege. Lots of people have privilege in this life—some are super smart, some are really attractive, some are quite athletic, some are musically talented or great actors. And some people (even the same people sometimes) have significant disadvantages—maybe they were born into abject poverty, maybe they grew up with two alcoholic parents, maybe they have physical or mental disabilities you can’t see, maybe they were beaten or raped or robbed at gunpoint in their lives, or something else way worse than belonging to a particular ethnic, racial, or cultural group that some people treat unfairly. News flash, kiddos: We’re not all equal, and we never will be. And there’s nothing right or just about trying to make us so. Should we have cut off Michael Jordan’s feet so he wouldn’t be so darn tall? Would the world be a better place if we had taken away J.K. Rowling’s typewriter after the first Harry Potter book? ALS wasn’t enough to slow Steven Hawking down; maybe we should’ve given him another handicap. You don’t rise out of oppression by pushing other people down. So stop whining about what you ain’t got and how someone else needs to give it to you. You just might get your wish. 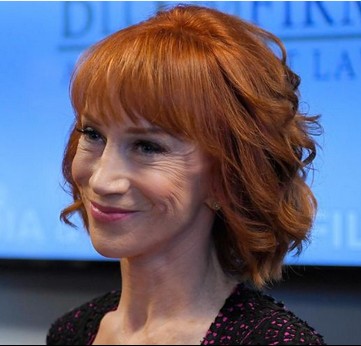 I haven’t blogged in a really long time, because I’ve been trying to keep my head down and get this darn fourth book in The Gifted Ones series finished, but shoot, I just can’t keep quiet about the Kathy Griffin thing. If you don’t know what I’m talking about, you either live under a rock, or you only read books and don’t pay attention to TV or the Internet, which makes you awesome! Unusual, but awesome.

So for you awesome folks, here’s the deal. Kathy Griffin is a comedienne of great fame and wealth who thought it would be funny or cool or whatever to share photographs of herself holding up a fake, bloody, severed head of President Trump, ISIS-style. I don’t personally find that remotely amusing, but I am also a staunch supporter of the first amendment to the Constitution, which accords to all U.S. citizens the right to express themselves freely. Contrary to what the far left would have us believe, free speech does include horrible, hateful speech and speech you just don’t like, a fact which has been reaffirmed by the high courts multiple times.

IMHO, Ms. Griffin’s photographs fall into the category of horrible, hateful speech, and I do indeed defend her right to express herself thusly. What I find ridiculous, however, is her speech yesterday, wherein she attempted to turn the tables and somehow blame the Trump family for all the negative fallout she received as a result of her little stunt. Here’s what she had to say about their reaction:

“What’s happening to me has never happened in the history of this great country, which is a sitting president of the United States and his grown children and the First Lady are personally, I feel, personally trying to ruin my life forever.”

Uh, sorry, Kathy, you don’t get to play the victim card. The right to free speech is just that. It does not offer protection from the repercussions of the speech (short of physical assault). When I was a kid, the typical example was that of the KKK being protected by police as they marched down the street in their white hoods in a public parade; people might be screaming at them as they marched, but they were free to march. I rather liken Kathy Griffin’s ISIS photos to those marches. The Constitution protects her right to self-expresssion, and likewise protects the rights of everyone who responds to her with a little self-expression of their own. If you throw rotten tomatoes at someone, don’t be surprised if they scrape a little off and toss it back on you, and certainly don’t ask anyone to feel sorry for you as a result.