Want to get started reading this series for FREE? Just subscribe to my mailing list below, and I'll send you the first book in the series, no strings attached. 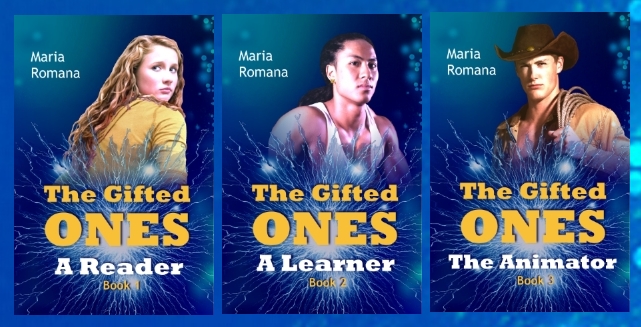 The Series:
The Gifted Ones is an episodic romantic suspense series, that currently has three volumes: A Reader, A Learner, and The Animator. Each episode is a complete story in itself, but leaves “dangling threads” to be resolved in later episodes. The stories are chronological and connected with recurring characters, so you will want to read them in order, similar to many ongoing dramatic series on television.

The Story (Book One):
Grace Nagle has had more than her share of tragedy in thirty-three years, but she’s finally settled into a solitary and quiet life raising her teenaged niece Ellie…quiet, that is, as long as she can keep Ellie in the dark about a certain genetic gift that runs in the family. When Ellie’s frightening encounter with the handsome new boy in town exposes the truth, however, the two are forced to flee to a mysterious mountain retreat. At first, Ellie is thrilled with her new life and her new, Gifted friends, and can’t understand her aunt’s trepidation. But when it becomes clear that Grace’s fears are not unfounded, Ellie learns that “different” isn’t always better. And sometimes, it means running for your life.

The Content:
The Gifted Ones series consist of books running from 65,000 to 95,000 words in length (250 to 350 paperback pages). The books are intended for audiences 16 and up, as they do contain some violence and sexual themes, but nothing graphic, gory, or explicit. All the books should be acceptable reading material for anyone from 16 to 106.

If you're ready to dig in and start reading now, just enter your email address, and I'll send you the first book in the series. I won't share your email address with anyone else, and you can unsubscribe at any time.