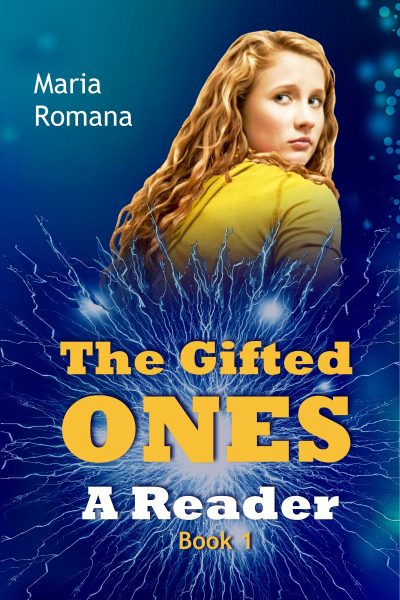 Grace has already lost her beloved older sister. She can’t lose her sister’s child, too. But keeping Ellie safe isn’t easy. There are those who know that Ellie inherited her mother’s Gift, and they’ll do anything to reclaim it…and her. Going it alone, hiding in plain sight, has worked for them so far, but when Ellie’s dreamy crush turns out to be a nightmare, Grace is forced to unbury the past and seek help where she least expects it. Can a whole cadre of Gifted Ones accomplish what Grace can’t on her own—can they work together to save Ellie from her mother’s fate? Or will Ellie surprise them all? And with so many Gifted men around, will Grace find more than she was looking for?

The Gifted Ones: A Reader is the first in an ongoing series of mystery/romance/adventure novels about a group of ordinary people with some extra-ordinary abilities. The books are suitable for ages 16 and up, with mild language and no explicit sex or violence ("off screen" only).

With his free hand, Aiden pushed a loose strand of the curling-iron curls away from Ellie’s face, and a hint of a smile formed on his lips.

But Aiden was having no trouble. "You know, everyone says you look just like your mother…"

Ellie wrinkled her forehead. It was true, but how did he know that?

The hand that had pushed back the curls now trailed down the side of her face, brushing her cheek. "But you know what I think? All I can see is dear old Dad, right there, right in the eyes."

What? How would he have any idea what her parents looked like? Something was not right. Ellie tried to jerk away, but the hand on the back of her neck tightened, gripping her to him. "Stop it! Let go of me!" She felt tears springing to her eyes.

Aiden started to laugh. "Where you gonna go, Ellie?"

"With me!" A female voice rang out from some distance back up the street that had brought them there, and the sound of light, rapidly moving feet accompanied it.

Aiden straightened up, still holding Ellie by the neck, and looked in Grace’s direction. "Oh, brother," he muttered, rolling his eyes, as though Grace’s appearance was merely an inconvenience.

"Let her go!" Grace was within twenty yards of them now.

Aiden turned in the direction of the cars parked along the cross-street and waved his hand, motioning in Grace’s direction. Immediately, the doors on a black SUV opened and two large men stepped out. Grace froze in her tracks as…what was that? What was the guy holding? A knife! Dear God, what in hell—

Ellie’s brain had turned to mush. Her eyelids were getting so heavy. Her knees finally gave way, and she fell against Aiden’s arm, unable to support herself.