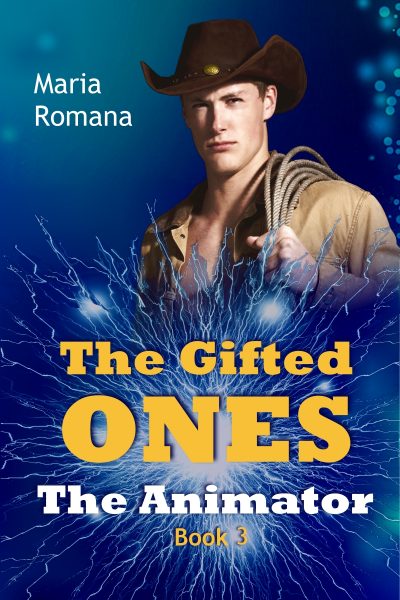 The Story
Book Three: The Animator
Ellie’s Aunt Grace has always had a love/hate relationship with The Gifted Ones. Deep down, she blames them for destroying her sister’s life, so when Doo Clovis, an especially kind-hearted Gifted One, shows her some attention, she isn’t quick to take the bait. When Grace finally lets her guard down and begins to warm to the handsome cowboy and his old-money Texas family, however, she is unprepared for the evil that lurks in the more distant branches of his family tree. The next thing she knows, Grace is found with blood on her hands, sucked into a web of lies and deceit, and must turn to The Gifted Ones to get herself out.

The Series
The Gifted Ones is an episodic, romantic suspense series, with each book running 65K to 100K words in length (300 to 400 paperback pages). Each episode is a complete story in itself, but leaves “dangling threads” to be resolved in later episodes. The stories are chronological and connected with recurring characters, so you will want to read them in order, similar to many action/adventure/mystery series on television.

Series Content
The Gifted Ones series is intended for an audience that is 16+. It is NOT intended to be YA fiction, as it does/will contain some violent and sexual themes, but nothing graphic, gory, or explicit. It should be acceptable reading material for anyone from 16 to 106.